In the Olympics of Guilt and Recrimination, we have a winner

The 2014 Winter Olympics have ended and Canadians are still on a high.

We trounced the Americans in hockey (always a good thing) and our women's curling team set an Olympic record that can never be beaten (all wins, no losses).

All in all, we're betting Canadians will say they got their money's worth at these Olys. How much money?  The federal government kicks in $22 million a year towards winter sports. (Another $34 million goes to summer sports and $6 million to team sports.)

They did us proud, each and every one of them, and that includes the coaches and parents of the athletes.

But while rooting through the numbers, we were struck by a sad fact.

The federal government is spending $22 million a year to support athletes and coaches who leave us bursting with pride, win or lose, at their dedication and sportsmanship.  At the same time they are spending nearly the same amount, $21.7 million, on the Canadian Museum for Human Rights, whose only goal is to make Canadians hate themselves, to blames themselves for historical wrongs, to promote ideas that divide the people, to feel as bad as possible about their ancestors and their political leaders.

That's when we stumbled across another shocking fact.  Public support for the CMHR is almost non-existent, if you measure it by financial contributions.

Ever since chief promoter Gail Asper launched a smear campaign against all ethnic groups that oppose giving primacy to the Holocaust at the "rights" museum, financial donations have plummeted.

The fundraising arm of the CMHR, Friends of the Canadian Museum for Human Rights, headed by Gail Asper, announced that it had raised $4 million in 2013.  That's less than the amount the museum owes for city taxes (and isn't paying).

But what was striking is that the total amount raised came from ONLY THREE DONATIONS.

Yep. You read right.  The "Friends" had to go hat in hand to rich people, some of whom had already signed cheques, for more money. Hardly anyone dug into their pockets.

* They got $2.5 million more from Michael and Amira Dan, of Ontario, who had already pledged $1 million.
* And they got $1 million from Alice and Grant Burton, also of Ontario.
* The remaining $1.5 million came from the Manitoba Teachers Society, which overrode opposition within its ranks to give money to the museum.

The Friends of CMHR say they got donations from another 200 people in 2013, but the money raised from the little people was so paltry they don't even count it in their total.

The largest non-millionaire contribution was $68,000 from two auctions of guitars signed by famous people. But those people were buying guitars, not giving money to the CMHR, probably in the hope their purchases would go up in price because of the autographs.

You can already smell the desperation from the CMHR. In public statements, their spokesmen have backed away---far, far away---from initial claims that the Canadian Museum for Human Rights would attract a quarter of a million additional tourists to Winnipeg each year.  Now they deftly speak only about a report they were given (don't blame us it it's wrong) that claims 250,000 people will visit the museum (they're here anyway, so if they've seen the zoo already, why not the ugly museum).

And they're trying to hype the white elephant through "exclusive" peeks at the museum interior for various news agencies.  The latest was Global News, which got the skinny on the 11 levels of choking propaganda that will greet attendees.

2. Indigenous Perspectives
Aboriginal concepts of humanity and our responsibilities to each other are explored in one of the most dramatic spaces of the museum. The focus is a circular theatre of curved wooden slats representing the multitude of Canadian aboriginal traditions, which will play a 360-degree film and serve as a space for storytelling, performance and discussion. (2,700 square feet plus outdoor terrace) 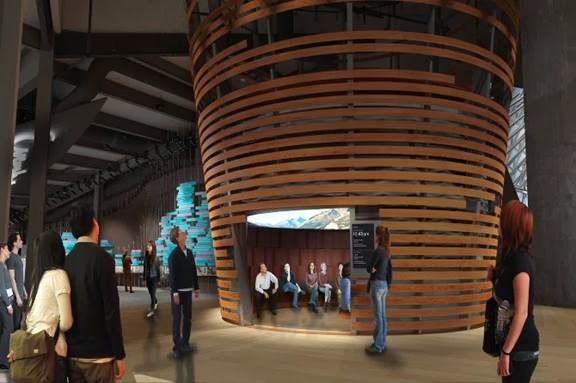 So you will get to sit in a giant basket and watch a movie, half of which is projected behind your head. Pure genius. Or you can go on the terrace for a smoke (hey, you got rights).

Maybe you will stop at:
3. Canadian Journeys
Canada’s Journey will contain 18 “story niches,” most of them eight-by-eight-foot “boxes.”
You can explore the 1919 Winnipeg General Strike.  We're betting they skipped the admiration of the strike leaders for the Communist Revolution in Russia in 1917. And how if they got their way, we would all be enjoying the same rights that citizens of countries controlled by the Communists enjoyed for 50 years.

Oh, and there's the perennial favorite, the Chinese Head Tax. Do you think they'll mention how Canada fought a war with Japan to free China from military dictatorship? We repaid that head tax a thousand times over.

Of course Japanese Canadian Forced Relocation gets a box. Will the Canadians captured at Hong Kong and tortured by the Japanese for four years get a mention here?
Where would you rather see your tax dollars go?
Athletes?  Or sackcloth and ashes?

Popular posts from this blog

The unreported bombshell conspiracy evidence in the Trudeau/SNC-Lavelin scandal

April 05, 2019
Wow. No, double-wow. A game-changing bombshell lies buried in the supplementary evidence provided to the House of Commons Judiciary Committee by former Attorney General Jody Wilson-Raybould. It has gone virtually unreported since she submitted the material almost a week ago. As far as we can find, only one journalist-- Andrew Coyne, columnist for the National Post--- has even mentioned it and even then he badly missed what it meant, burying it in paragraph 10 of a 14 paragraph story. The gist of the greatest political scandal in modern Canadian history is well-known by now. It's bigger than Adscam, the revelation 15 years ago that prominent members of the Liberal Party of Canada and the party itself funneled tens of millions of dollars in kickbacks into their own pockets from federal spending in Quebec sponsoring ads promoting Canadian unity. That was just venal politicians and a crooked political party helping themselves to public money. The Trudeau-Snc-Lavalin scandal is
Read more

Manitoba Hydro is on its deathbed. There, we said it.

August 10, 2017
Manitoba Hydro is on its deathbed. Oh, you won't find anyone official to say it. Yet . Like relatives trying to appear cheery and optimistic around a loved one that's been diagnosed with terminal cancer, the people in power are in the first stage of grief -- denial. The prognosis for Hydro was delivered three weeks ago at hearings before the Public Utilities Board where the utility was seeking punishingly higher rates for customers in Manitoba. It took us this long to read through the hundred-plus pages of transcript, to decipher the coded language of the witnesses, to interpret what they were getting at, and, finally, to understand the terrible conclusion.  We couldn't believe it, just as, we're sure, you can't--- so we did it all again, to get a second opinion, so to speak.  Hydro conceded to the PUB that it undertook a massive expansion program--- involving three (it was once four) new dams and two new major powerlines (one in the United States)---whi
Read more

October 28, 2007
(Bebo tribute page to Aaron Nabess on the right, his handgun-toting friend on the left) At least six murder victims in Winnipeg in the past year are linked to a network of thuglife, gangster rap-styled, mainly aboriginal street gangs calling themselves Crips and Bloods after the major black gangs of L.A. The Black Rod has been monitoring these gangs for several months ever since discovering memorial tributes to victim Josh Prince on numerous pages on Bebo.com, a social networking website like Myspace and Facebook. Josh Prince , a student of Kildonan East Collegiate, was stabbed to death the night of May 26 allegedly while breaking up a fight. His family said at the time he had once been associated with an unidentified gang, but had since broken away. But the devotion to Prince on sites like Watt Street Bloodz and Kingk Notorious Bloodz (King-K-BLOODZ4Life) shows that at the time of his death he was still accepted as one of their own. Our searches of Bebo have turned up another f
Read more

April 08, 2016
As the vultures of the press circle over the wounded Liberal Party of Manitoba, one NDP star candidate must be laughing up her sleeve at how her extremist past has escaped the scrutiny of reporters and pundits. Parachuted into a safe NDP seat in Winnipeg's North End, she nonetheless feared a bruising campaign against a well-heeled Liberal opponent.  Ha ha.  Instead, the sleepy newspeeps have turned a blind eye to her years of vitriolic attacks on Christianity, white people, and police. * She's spent years  bashing Christianity  as the root cause of all the problems of native people in Canada. * She's called for  a boycott of white businesses . * And with her  Marxist research partner, she's  smeared city police as intransigent racists . Step up Nahanni Fontaine, running for election in St. John's riding as successor to the retiring Gord Macintosh. While her male counterpart in the NDP's galaxy of stars, Wab Kinew, has responded to the controversy over
Read more

Exposing the CBC/WFP double-team smear of a hero cop

August 04, 2020
Published since 2006 on territory ceded, released, surrendered and yielded up in 1871 to Her Majesty the Queen and successors forever. Exposing the CBC/FP double-team smear of a hero cop Some of the shoddiest journalism in recent times appeared this long August weekend when the CBC and Winnipeg Free Press doubled teamed on a blatant smear of a veteran city police officer. In the latest example of narrative journalism these media outlets spun stories with total disregard for facts that contradicted the central message of the reports which, simplified, is: police are bad and the system is covering up. Let's start with the story on the taxpayer funded CBC by Sarah Petz that can be summed up in the lead. "A February incident where an off-duty Winnipeg officer allegedly knocked a suspect unconscious wasn't reported to the province's police watchdog, and one criminologist says it shows how flawed oversight of law enforcement can be." There you have it. A policeman, not
Read more

August 02, 2019
When did the magic die? A week ago the Winnipeg police department delivered the bad news---crime in the city is out of control. The picture painted by the numbers (for 2018) was appalling. Robberies up ten percent in  a single year.  (And that was the good news.) Property crimes were up almost 20 percent.  Total crime was 33 percent higher than the five year average. The measure of violent crime in Winnipeg had soared to a rating of 161.  Only four years earlier it stood at 116. That's a 38 percent deterioration in safety. How did it happen? How, when in 2015 the police and Winnipeg's police board announced they had discovered the magic solution to crime? "Smart Policing" they called it.    A team of crime analysts would pore through data to spot crime hot-spots and as soon as they identified a trend (car thefts, muggings, liquor store robberies) they could call in police resources to descend on the problem and nip it. The police
Read more

The Black Rod
We are citizen journalists in Winnipeg. When not breaking exclusive stories, we analyze news coverage by the mainstream media and highlight bias, ignorance, incompetence, flawed logic, missed angles and, where warranted, good work. We serve as the only overall news monitors in the province of Manitoba. We do the same with politicians (who require even more monitoring.) EMAIL: black_rod_usher@yahoo.com